Fun Things To Do in Bremen

I had never heard of Bremen before moving to Germany. I was pleasantly surprised at how much this historic city has to offer.

If you have never been to Germany, your first question may be “Where is Bremen?”  Bremen has two UNESCO World Heritage sites surround the market square dating back over 1000 years making it one of the most impressive market squares in all of Europe.  But besides all the history, Bremen has some whimsical statues with just as whimsical stories that are sure to entertain children.  There is no shortage of fun things to do in Bremen.

Bremen is a city of ~550,000 located in northern Germany, ~ 120 km south-west of Hamburg.  If you’re planning to visit northern Germany, I would highly recommend a day or two in Bremen. Furthermore, Bremen is a 1200-year-old city and is bursting with history.  Most of the sites are within the compact city center, which was the historic trading area of the city.  Bremen was in the Hanseatic League – an economic alliance of trading cities along the coast of northern Europe in the late Middle Ages.

Fun Things To Do In Bremen

To ensure that Bremen remained a strong trade city, the Roland Statue was erected in 1404 in the market square.  Roland is the protector of trade towering the market square at a studly 5.5 meters.  The Roland Statue is a UNESCO World Heritage Site. If you like Bremen be sure to rub Roland’s knees. It’s said that by doing this you will return to Bremen.

Just a few meters away is another UNESCO World Heritage Site,  the Renaissance Bremen Town Hall (Rathaus in German).  It was built in the gothic style in the early 15th century. And was renovated again in the 17th century, but this time in the Weser Renaissance style. Furthermore, it’s the most impressive town hall I have ever seen!

As if that wasn’t enough for one market square, there is also St. Peter’s Cathedral,  a 1200-year-old cathedral and the oldest church in the city.  If you’re feeling energetic you can climb the 256 steps. I’ve heard is a spectacular view.  Unfortunately, the cathedral was closed when we were there.

Just around the corner, is the very popular Town Musicians statue.  Based on a popular Brother’s Grimm fairy tale the story goes that a donkey, dog, cat, and rooster all past their prime,  headed out to make a better life for themselves in Bremen, without an owner as musicians.

Related Reading: 10 Things To Do in Cologne

We continued on our self-guided tour of Bremen and soon came to Böttcher Street. This just may be my favorite street in the entire world and wandering around here was one of my favorite things to do in Bremen! Böttcher Street is called the “secret main street”. The street is old and narrow and dates back to the Middle Ages where wine barrels were made.

Böttcher Street has been transformed into a unique work of art. With carvings and paintings lining the streets.  Here you will also find the Glockenspiel House where 30 bells ring 3 times a day.  If you miss the bells, which have a unique ring, don’t despair, besides gawking at all the wall art, you can easily entertain yourself on  Böttcher Street with one of the museums, artist studios or restaurants.  Böttcher Street is not very long, but I could have wandered it for hours.

Another popular street in Bremen with a vivid history is Söge Street. Söge means sow or pig. But in most of Germany, the word “Schwein” is used for pig. In the middle ages pig stalls belonging to the working class were located along Söge Street.   It’s said that the pigs ran up and down along the street eating everything in sight. Thereby keeping the street free of trash. 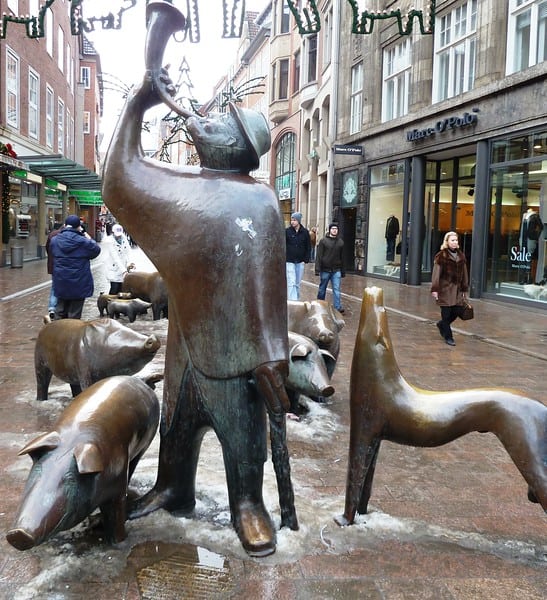 Quite the difference from its present state of a popular shopping street.  Personally, I would have preferred the pigs racing through the street to a shopping street, but perhaps that’s just me.  You will have no trouble finding it. The entrance of Söge Street is marked with a statue of a Swineherder and several pigs.

I have to confess that my initial reason for visiting here was because it’s near where my then German partner’s father lives. Bremen surprised me with all its fun things to do. And I will definitely be back to explore it more thoroughly.  It’s definitely worth spending a day or two here and if you have time, I can’t recommend the German Emigration Museum enough, located just 65km in nearby Bremerhaven.

Related Reading: Trier, Germany: All You Need To Know Before You Visit

Parkhotel Bremen – ein Mitglied der Hommage Luxury Hotels Collection is located close to the Old Town. The rooms have a unique design. Some rooms offer views of the Holler Lake. There is a massive spa that includes a fitness area, scented steam rooms, and an ice grotto.

H+ Hotel Bremen is located in the historic market place in the Old town. The rooms are modern and elegant and there is a great buffet breakfast every morning. The hotel offers bicycle rentals.

Best Western Hotel Bremen City is located in the city center. The hotel rooms are well-equipped. Guests can enjoy a hearty breakfast buffet and drinks on the beautiful Mediterranean style courtyard.

If your spending a few days here make sure to get yourself a Bremen card. You can choose between 1, 2 or 3 days and the card will give you free access to public transport as well as discounts to all the major attractions including a ferry from Osterdeich to Cafe Sand.

Take a walking tour of the historic Schnoor district and explore the old houses and alleyways. The area dates back to the 13th Century and has a long history.

If walking is not your thing then try a scenic bus tour through the city. You will discover the history and culture of this wonderful city.

Just in case you’re still not convinced of all the fun things to do in Bremen, did I mention that Bremen is also home to Becks beer?  And yes, brewery tours are available.