Our pics of the best castles in Germany which are some of the most beautiful castles in the world.

It’s like stepping into a fairytale setting. Where castles sit atop high mountain peaks. With its rich history and magical surroundings. Visiting (at least) one of the best castles in Germany is a must!

There are an incredible 25,000 castles in Germany! With a ton of information out there. It can be hard to navigate. Therefore, I’ve collected the 24 most beautiful and magical castles in Germany. Check them out! 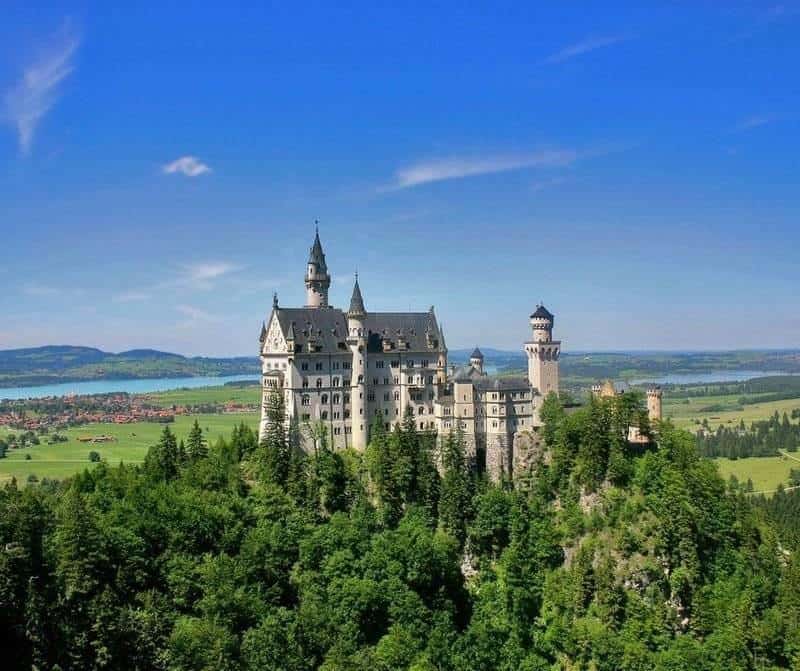 “The Cinderella Castle” is situated high on a rocky outcrop. Overlooking the village of Hohenschwangau. At the foot of the German Alps in Bavaria. It’s just breathtaking! Designed in a mix of Roman, Gothic, and Byzantine styles. All randomly blended. It’s over-the-top and incredibly unique.

Due to its popularity, it’s definitely necessary to do some planning ahead. Check out my complete visitor guide to Neuschwanstein Castle.

If you want to make the most of it, check out this tour! Full-day tour from Munich. Including magical Neuschwanstein and Linderhof. As well as a visit to a small Bavarian town. 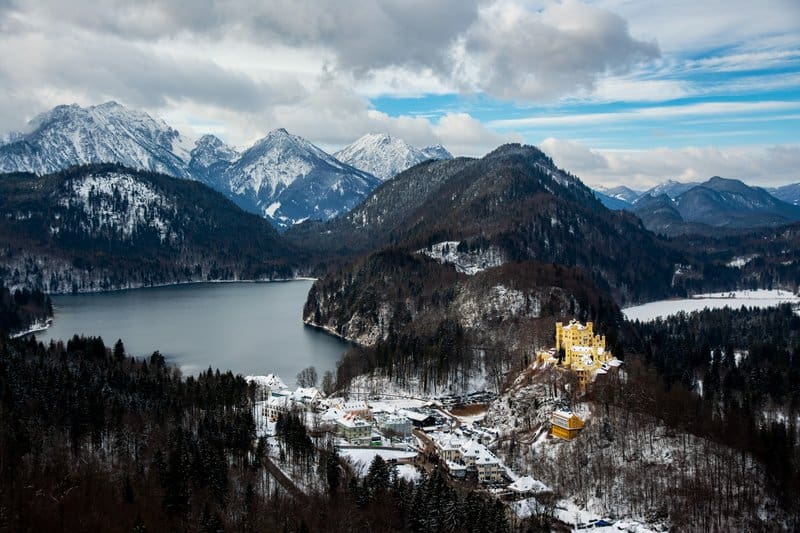 If you visit Neuschwanstein, then Hohenschwangau should be on your list too. They are located near each other.  And you can buy a combined ticket for both. It’s not nearly as popular as Neuschwanstein. But still beautiful! 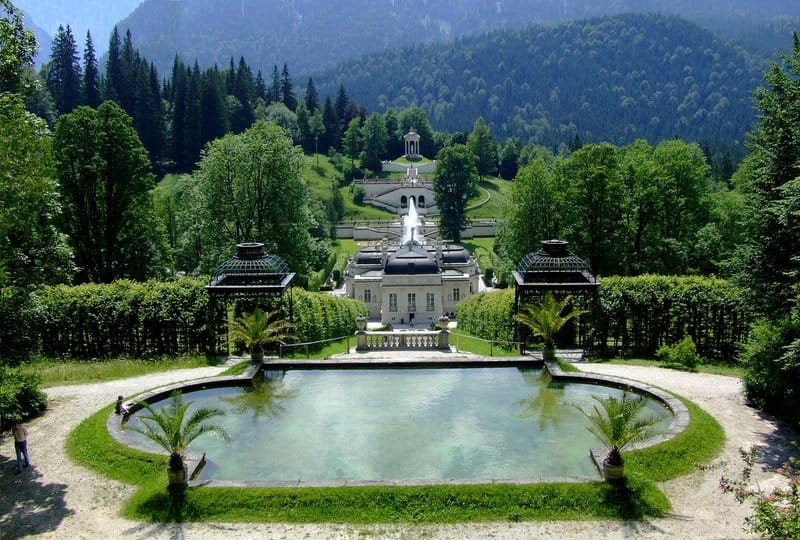 Linderhof Castle is the only castle that eccentric King Ludwig II finished before he died a mysterious death. I also really enjoyed the park grounds of the palace.  There are formal gardens, water features a Moorish Kiosk and a Moroccan House. 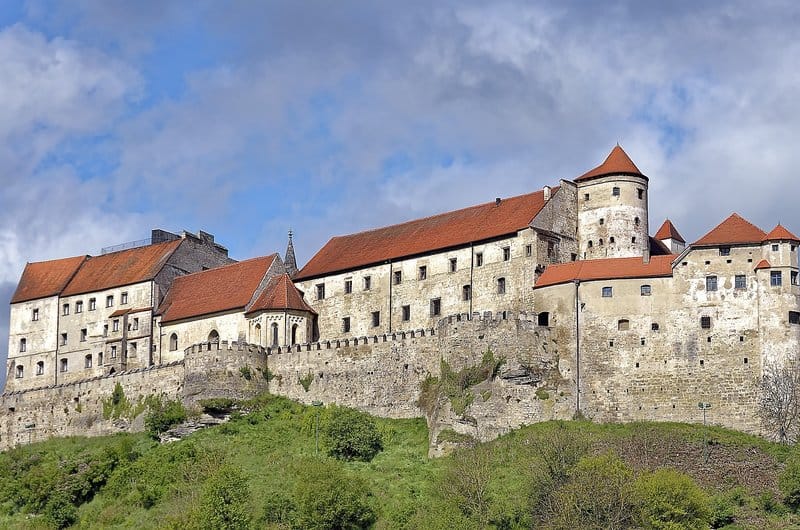 With a claim to fame of being the longest castle in Europe. And another top best castles in Germany. Measuring in at an impressive 1043m long. One of the longest castles in the world. And get this – it’s located just over 110km east of Munich, where I live. It’s also a magnificent example of a late medieval fortification that is mostly intact. Pretty impressive when you consider that it dates back to 1025!

Read all about it here. 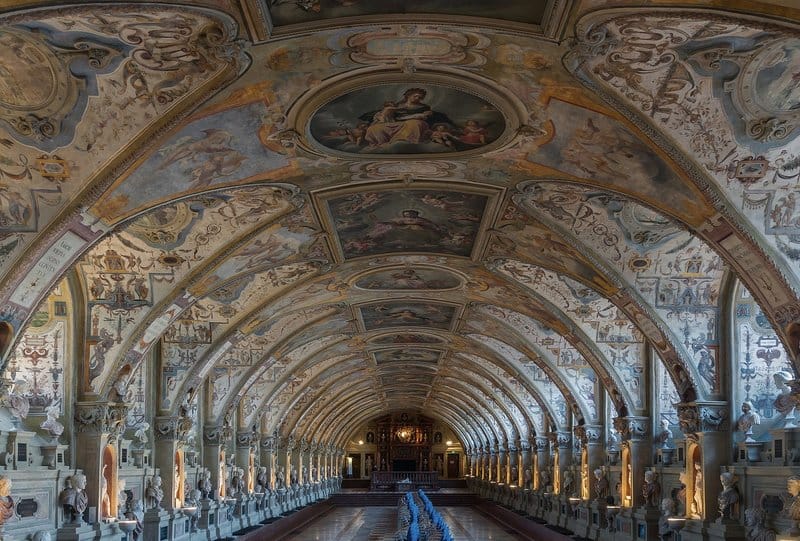 The Munich Residenz was the main palace of Bavarian rulers for over 400 years. It’s a grand palace. One of the largest and most lavish palaces in all of Europe. Consist of 130 rooms open to the public. But it was actually one of the smallest rooms that grabbed my attention. – The Ornate Chapel. It’s incredible.

If you really enjoy magical castles and classical concerts. You should enjoy a concert in the Residenz. With beer or wine tasting. This is where Mozart used to play himself! 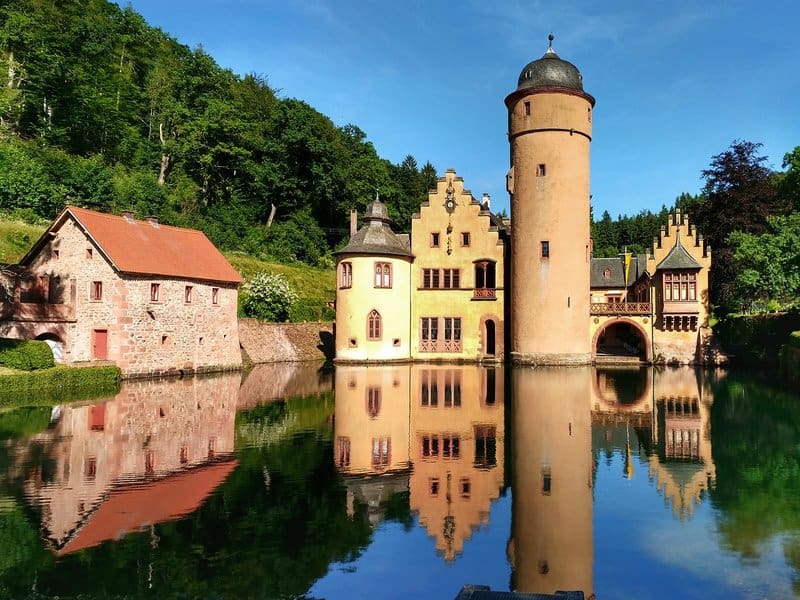 One of Germany’s most fascinating castles. It’s a late-medieval and early-Renaissance moated castle in the Elsava Valley in Lower Franconia, Bavaria. It’s tucked deep into the forest and surrounded by rolling hills outside of the city of Mespelbrunn. It’s a fairly small castle and not very many tourists visit this place. However, it’s unique due to the fact that it’s a moated castle and the reflections in the water make for a fascinating effect.

Located on Herreninsel, the largest island in the Chiemsee Lake. Visit this amazing island, that dates back to King Ludwig second. Surrounded by a beautiful lake. This picturesque castle is definitely worth a visit! Take a day tour from Munich. Where you can explore beautiful sceneries along the way, a boat tour, and a guided castle tour. 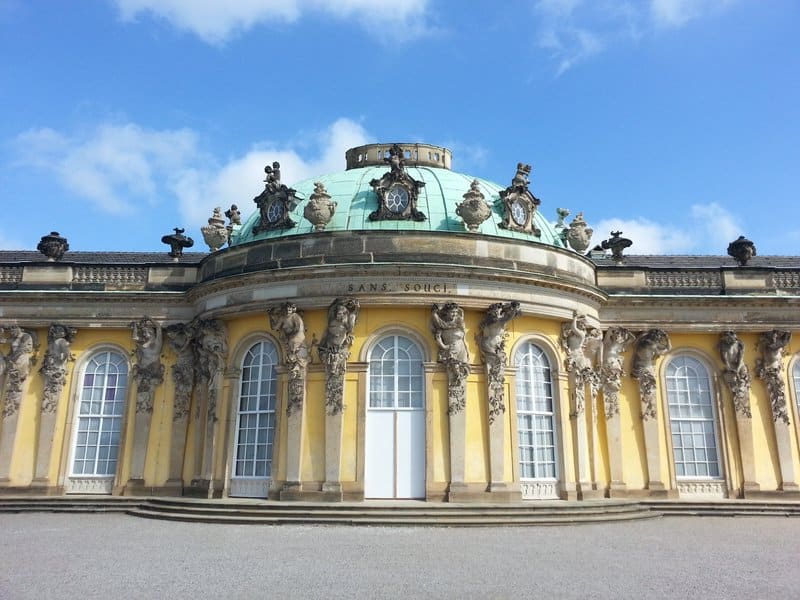 Sanssouci Palace is the palace most closely linked with Fredrick the Great. It’s a UNESCO World Heritage Site. Located on a small rise, covered with vineyard terraces near Potsdam not far from Berlin. Today, you’ll find Frederick II’s tomb on the palace hill. Full of rich history this is definitely a must-see in your hunt for the best castles in Germany and it’s easy to reach from Berlin.

Check out this tour from Berlin to enjoy one of the best castles in Germany. Check out this video to see why this is a must-visit castle: 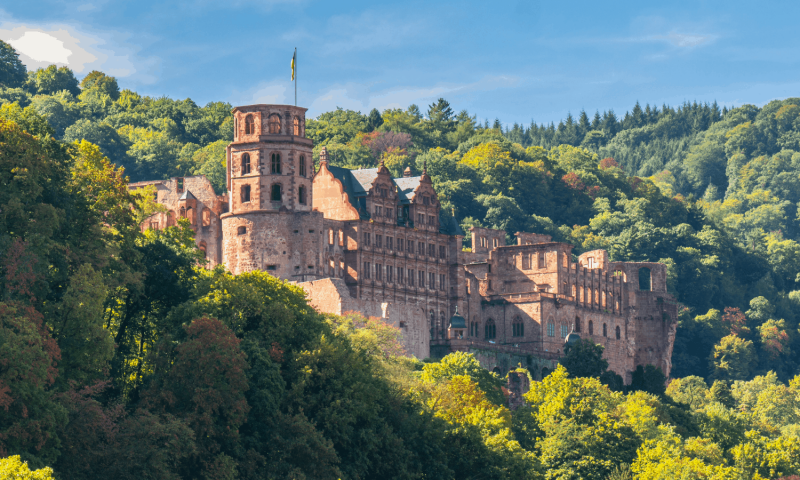 One of Germany’s most famous castles! Nestled on top of a hill. Overlooking the picturesque baroque town of Heidelberg. Just as breath-taking as the castle is from the city. So too is the city from the castle.

The stunning views and surroundings combined with a history that spans 800 years back. Each building highlights a different period of German architecture. It’s amazing if you’re interested in history or architecture.

To fully experience Heidelberg Castle and its surroundings, join this 3 hour private tour! 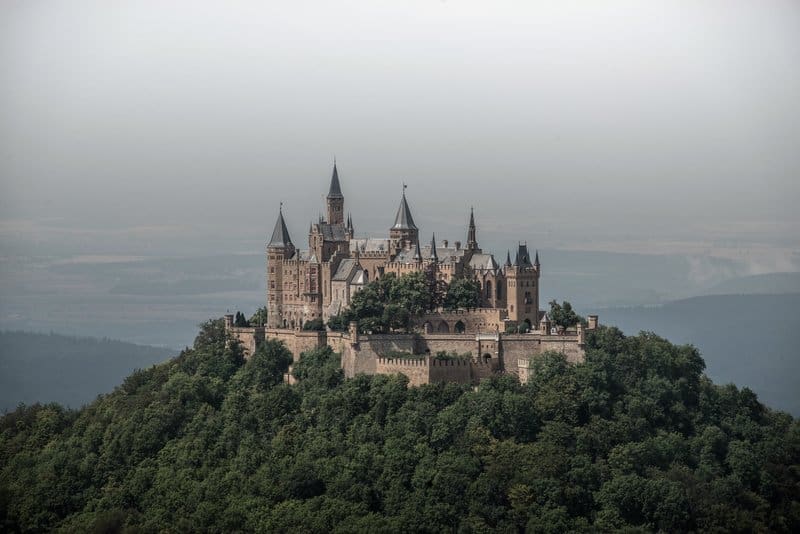 Another one of Germany’s top visited castles. The proud fortress perched on conical mount Zoller offers majestic panoramic views. Stretching over more than 100 kilometres. The buildings history dates back 1000- year. Today, the castle is still privately owned by the Prussian line. And the Swabian Royal House of the Hohenzollern

Check out this full day tour from Frankfurt to experience a whole day of magic! 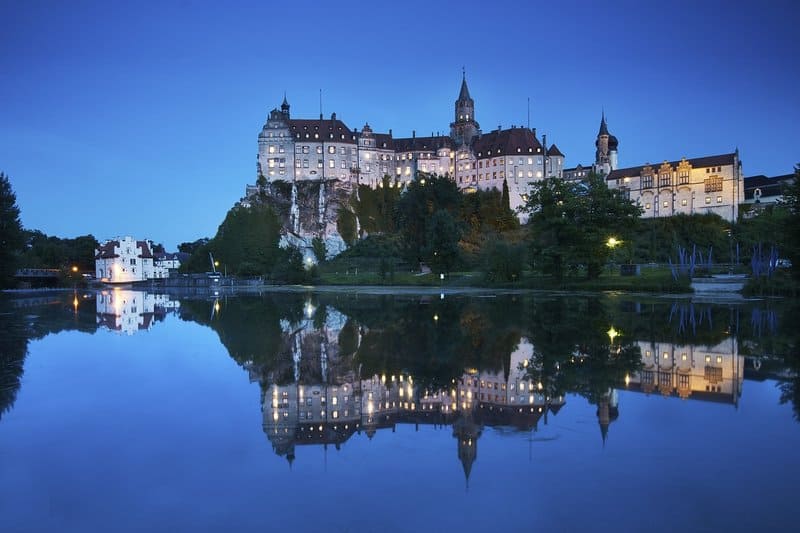 City high on a rocky cliff in the center of Sigmaringen. This beautiful castle has been owned by the royal family of Prussia since the Middle Ages. And they still live here! The family is today best known for the more famous Hohenzollern Castle it’s sister castle located 50 km away. But this castle is a true hidden gem. If you’re driving it’s worth visiting both castles 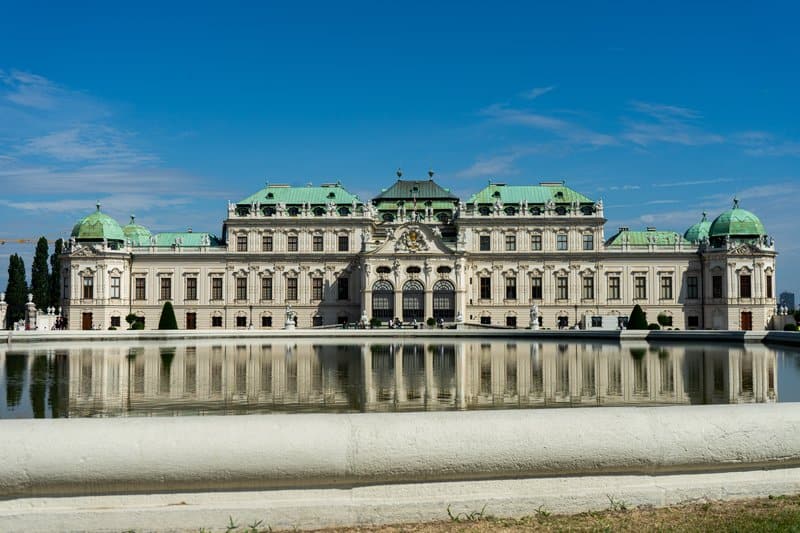 It’s one of Europe’s most impressive Baroque buildings. And another of the best castles in Germany. Renowned for its artistic achievements. Outside on the castle grounds, you’ll find the whimsical fairy garden. And every year the palace is also home to the world’s largest pumpkin festival. This is your chance to see 450,000 pumpkins on display.

Ludwigsburg Palace is the perfect day trip from Stuttgart.

Insider Travel Tip: Buy the StuttCard. With this, you can get discounts on tours and transport in the area. 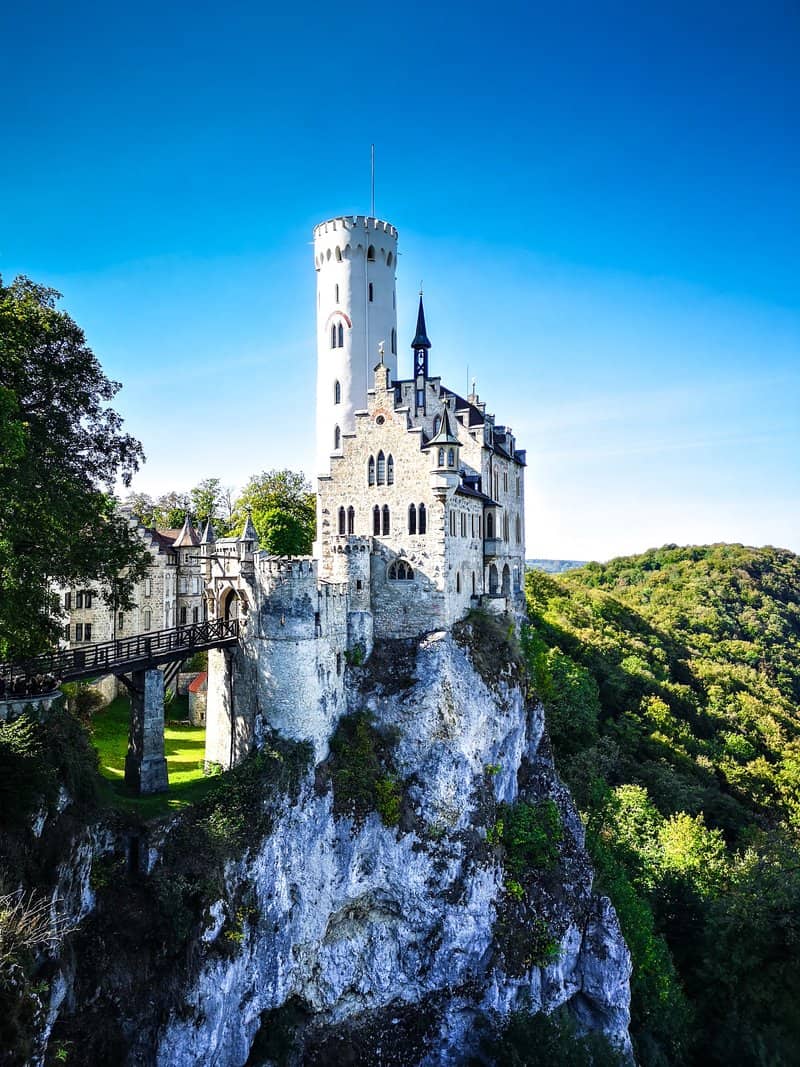 Known as the fairytale castle in Baden-Württemberg. It’s not on most visitor’s radar. But if you like off-the-beaten-path gems you don’t want to miss this one! I mean, how unique is this castle? With the beautiful views of the Echaz Valley and Swabian Alps. It’s only an hour drive south of Stuttgart.

Read also 7 facts you should know before visiting.

Best Castles to Visit in Rhineland-Palatinate 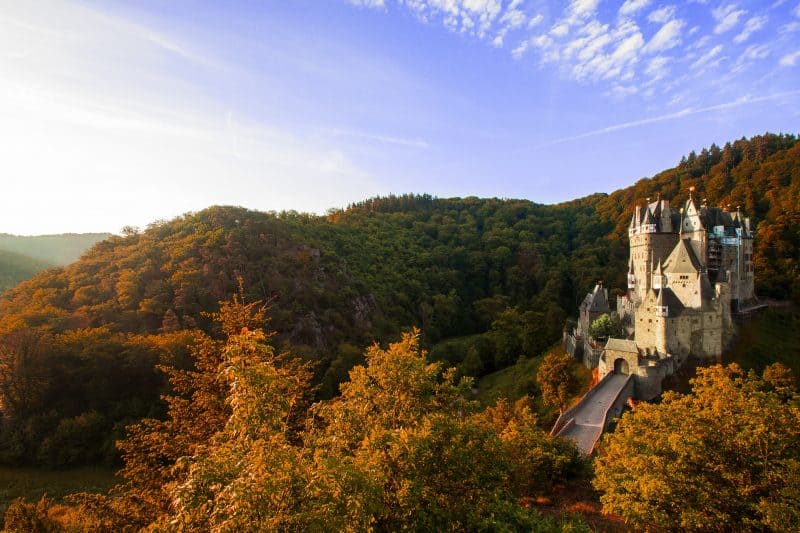 If there is one German castle that has risen to popularity in recent years thanks to social media, it’s Eltz Castle in Western Germany. Its an iconic fairytale castle surrounded by nature in the German woods. This medieval castle is unique to the Rhineland-Palatinate region. It was never destroyed. To this day the castle remains within the ownership of the initial family.

The only way to get inside the castle and the treasury is on a guided tour. Check out this tour! 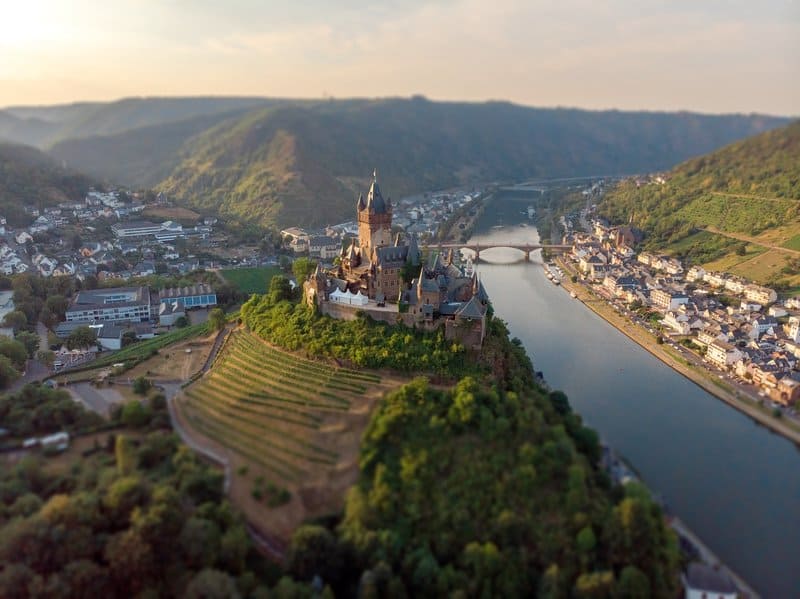 Laying above the scenic town of Cochem on the Moselle River. With gorgeous vineyards surrounding it. It has changed hands numerous times and. And like most castles, also changed its shape over the centuries. Some critics have argued the authenticity of the castle due to changes in modern time.

But, it does contain original elements. It also has a very interesting story. And its long history is an integral part of the town history. Not to mention the view from the castle is as impressive as the castle itself.

Find out more about this 11-th century castle on the homepage.

The beautiful Rhineland-Palatinate region doesn’t lack beautiful historic buildings. And the Rheinstein Castle is among one of them. Not far from Frankfurt, graciously overlooking River Rhine. The castle once occupied an important strategic location. That nowadays excels in its romantic beauty.

See one of the best castles in Germany on a 1.5-hour boat ride! 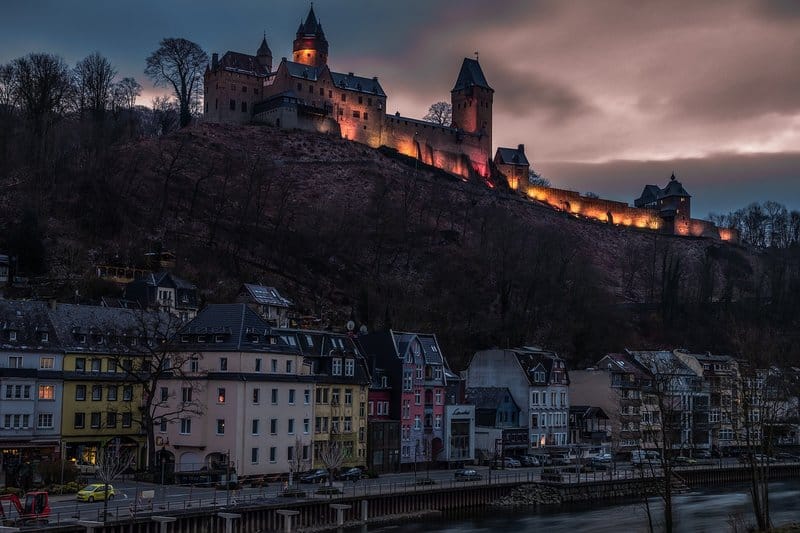 The Altena Castle was the first permanent hostel in the word. It was the landmark of the city. And with its museum, it’s the main attraction for tourists.

The main museum in the castle is the museum of the County of Mark. The exhibitions range from the early geological history through the Middle Ages to the early modern period and the industrial age to the present day. See the official website for further information.

A unique castle with a wonderful panorama over the Rhine. It’s situated below the Drachenfels. It was built from 1882 to 1884. And is now regarded as one of the most significant castle buildings of the late 19th century in Germany. This place is full of rich history. You can find further information on the official site. 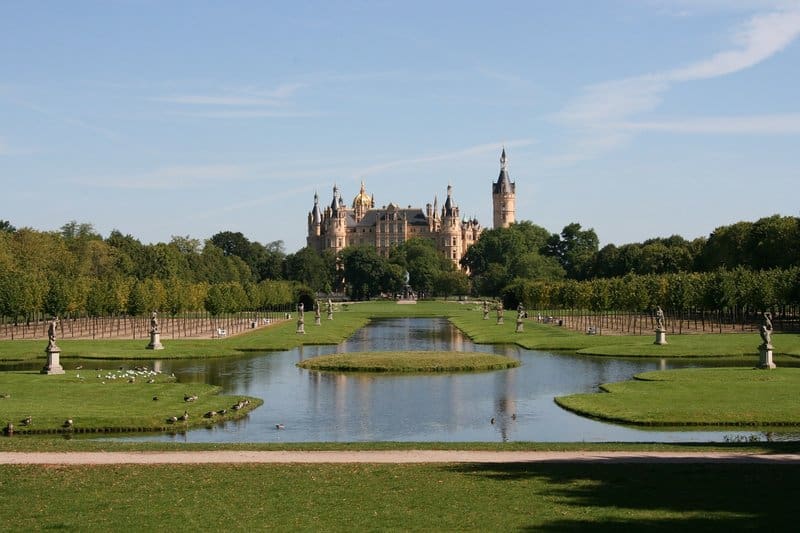 Set in a beautiful location on a small island in Lake Schwerin in Mecklenburg-Vorpommern, northern Germany.. Schwerin Castle is one of Europe’s foremost examples of historicist architecture. This is a romantic fairytale fortress. Boasting fabulous views across the water. It’s an architectural masterpiece. Which consist of 653 rooms and dozens of pointed towers.

Full day tour of both the city and the castle here! 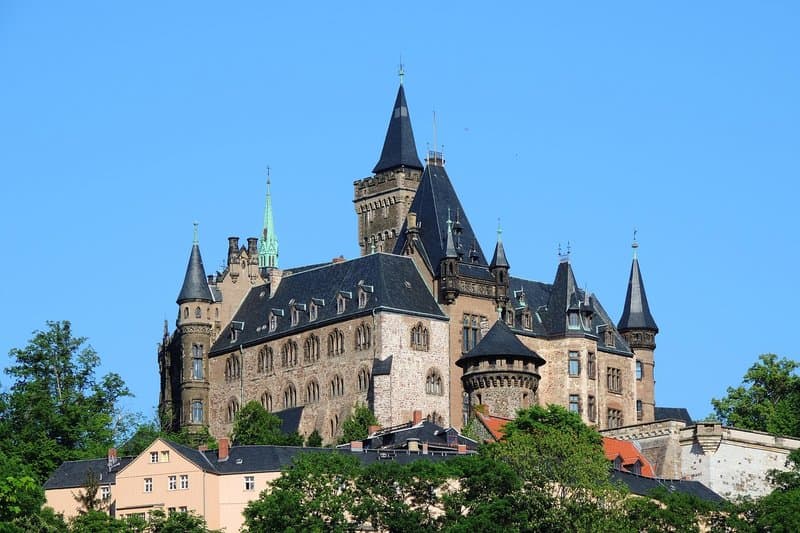 This Romanesque-style castle was founded in the 12th century. Used as a hunting lodge by the old emperors of Germany. It has changed architecturally from Neo-Gothic to a Renaissance fortress. And by the 18th century into a Baroque masterpiece. In some respects, it appears similar to Neuschwanstein even though it was built much earlier.  See their website for further information. 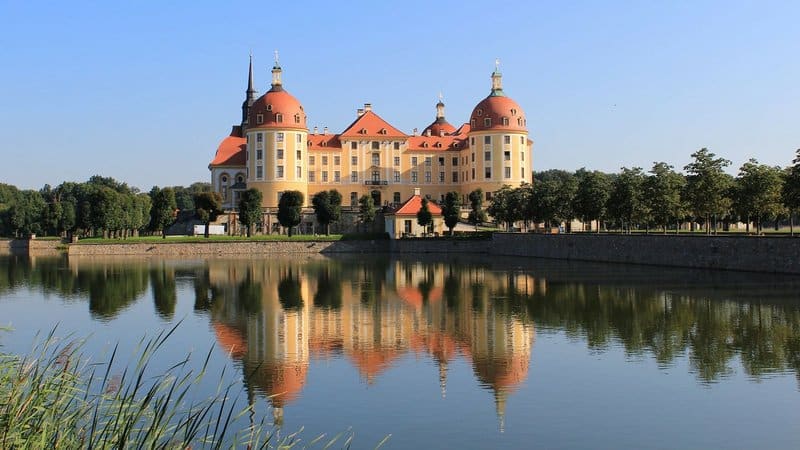 This castle is a hunting lodge. Built in the Renaissance style back in 1542. On a granite dome in Friedewald Forest that was rich in wildlife. Located on a large pond with an artistical backdrop.
Check out this tour! 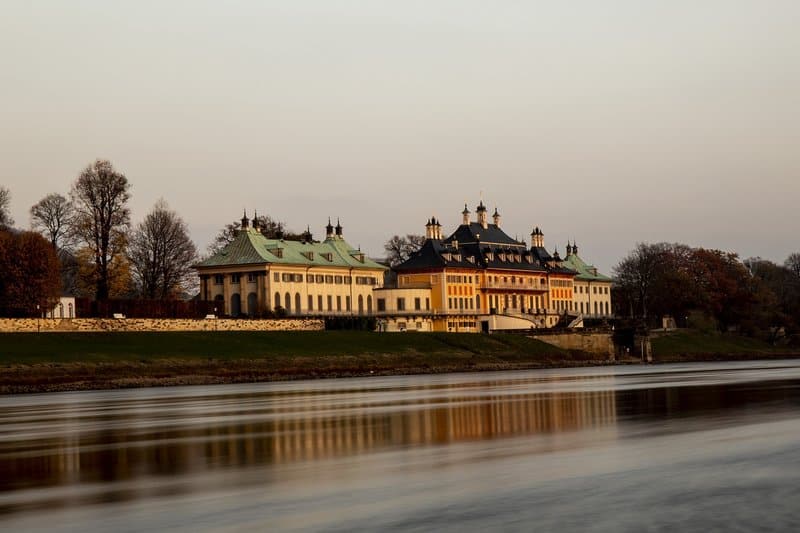 Situated on the banks of the Elbe. Was the former summer residence of the Saxon royal court. The palace complex consists of three main buildings and is full of photo opportunities. The buildings enclose a Baroque garden and are surrounded by a large public park. It contains botanical attractions from all over the world.

See the beautiful castle from a boat tour on Dresden! 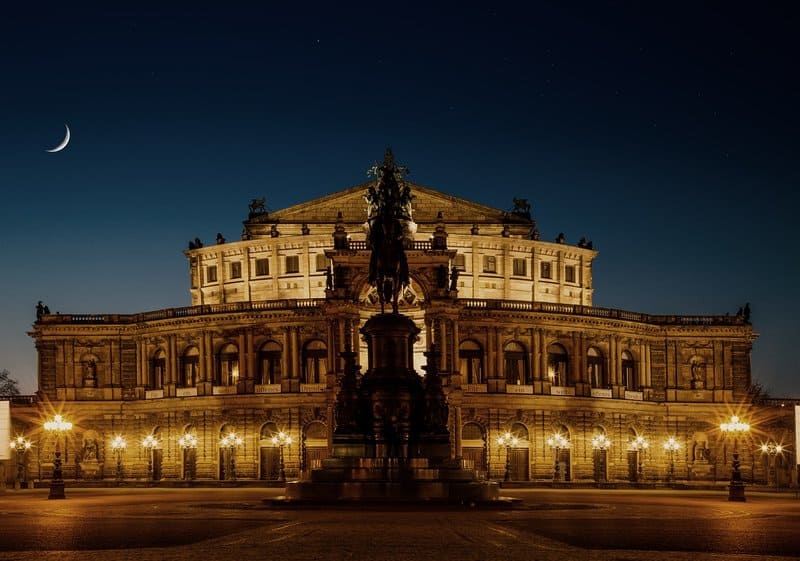 One of the oldest buildings in Dresden.  It is known for the different architectural styles employed, from Baroque to Neo-renaissance. Today, the residential castle is a museum complex and an art library.

Explore this historic old town and immerse yourself in the world of the baroque. Check out this private tour!

Best Castles to Visit in Thuringia 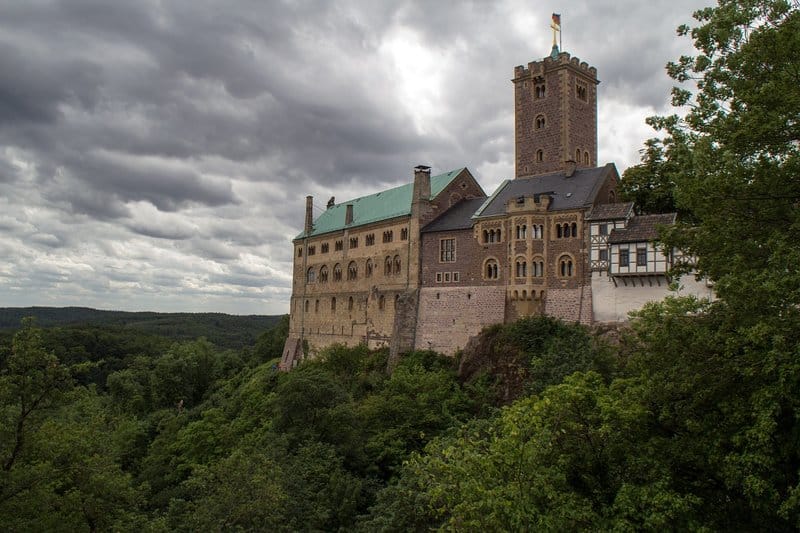 At the very heart of Germany lies the Wartburg Castle. – A place that rich in history and significance that dates back to the middle ages. Since 1999 it’s been a UNESCO World Heritage Site list.

Significantly, Martin Luther translated the New Testament of the Bible in German in Wartburg Castle. Check out our article with further information on visiting the castle

Of the 25,000 castles here are our top choices for the 24 best Castles in Germany! Which ones would you like to visit? Or add to the list? 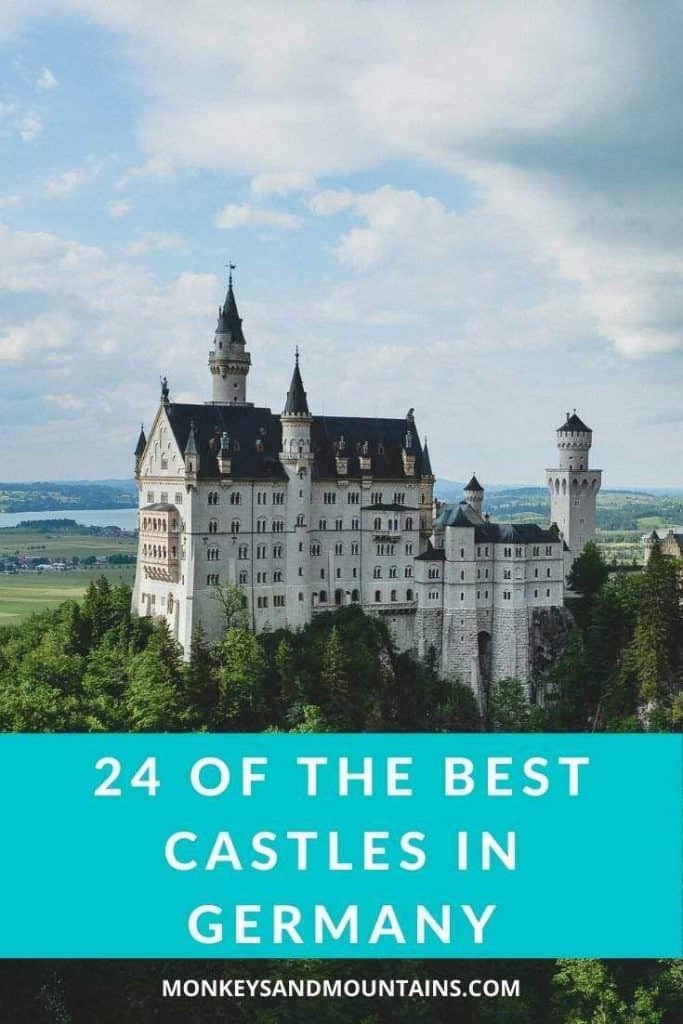