Carnival Germany: Why You’ll Want to Check Out the Parades

Carnival parades are one of the highlights of carnival in Germany. See why: 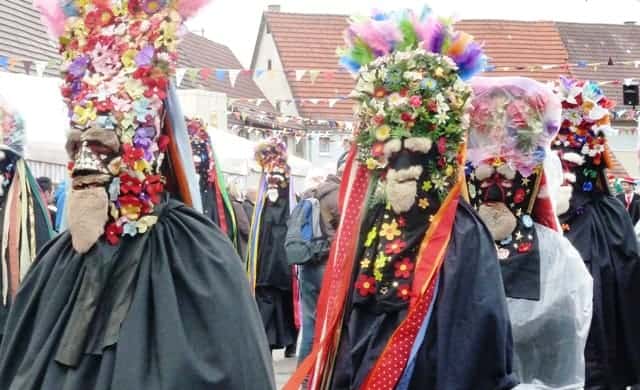 We choose the Swabian village of Grosselfingen, a village of just over 2000 inhabitants about an hour south of Stuttgart.  It was a somewhat random choice. Considering the fact that there was a parade on the day we wanted to go and it wasn’t too far from Stuttgart.  It was the Sunday before Old Women’s Day when the carnival really gets started in Germany. I had never been to a parade before and was excited to see whether it lived up to my expectations. Each town, village, and city has its own traditions when it comes to the carnival parade, which makes it more interesting than ever to experience.

Related Reading: Being An Expat In Germany: 5 Tips To Make It Easier

Children and the Carnival in Germany

Almost immediately as soon as the parade procession started I felt sorry for the children.  Only small amounts of candy were being handed out sparingly during the carnival parade, and in its place bakers were handing out pretzels and buns while butchers were handing out sausages.

I found this beyond hysterical and when I questioned my German friend, he got rather defensive and asked me “Why would a baker hand out candy when they can hand out their own bread?”  Touche, I didn’t have a good response but I couldn’t help feeling sorry for the poor German children, I mean come on, what kid would rather have a sausage or bun over a piece of candy?  Or perhaps a German child would? After all, Germans love their bread.

Related Reading: Jochberg: Why You Need To Do This Hike In The German Alps

Drinking at the Carnival Parade in Germany

It was difficult to tell at first whether the rambunctious guys in the crazy costumes were under the influence or just acting crazy.  Halfway through the parade, we got the answer as two of them cracked open a bottle of schnapps and starting downing shots in the middle of the parade.  I actually felt relieved to see that they were drunk as they were a strange bunch. It was an odd thing to see nonetheless, or maybe just new since I had never been to a parade before.

Related Reading: 5 Things You Need to Know About Christmas in Germany

Germans Know How to Have Fun

Germans appear very reserved in public, even though they can be quite different in private, so it was nice to see what appeared to be most of the village come out, let loose and have a good time. Everyone was there from babies to grandmothers and seemed to enjoy themselves. I know we did. And the experience was so exciting that I attended a few more since.

Germans Have an Odd Sense of Humor

Following the carnival parade, the chief or master of ceremonies (I’m not sure what to call him) started to give a speech.  I caught words here and there but felt better when J.P. said that even he was struggling to catch everything since they were using a lot of Swabian slang.  The gist of it was the chief was telling everyone the rules of the village.  I asked J.P. if this was serious or just for fun.

He stared at me in disbelief and said: “Of course it’s for fun.”   Perhaps only Germans would find reviewing a list of the village rules fun.  The concept was definitely lost on me, but perhaps it’s also because humor does not translate well.  On the other hand, none of the Germans were laughing either. Being an expat, I was still learning a lot about what to expect from Germans.

Why Are There No Women in the Carnival Parade in Germany?

This was just one of the many questions I had about the Grosselfingen Carnival Parade. This question was not easily answered. Each village has its own traditions and costumes. So if you want to know the meaning of everything you need to be a local or know your history. The carnival in Grosselfingen dates back to 1439. There’s a lot of history there but I think it will be fun to find out more.

Have you been to a carnival parade in Germany?  What were your first impressions?