The first time I went to the pumpkin festival was three years ago, albeit reluctantly.  My German partner at the time dragged me. He said it would be fun.

Having never been to a pumpkin festival and not really wanting to go, I thought it sounded cheesy and something just for kids. 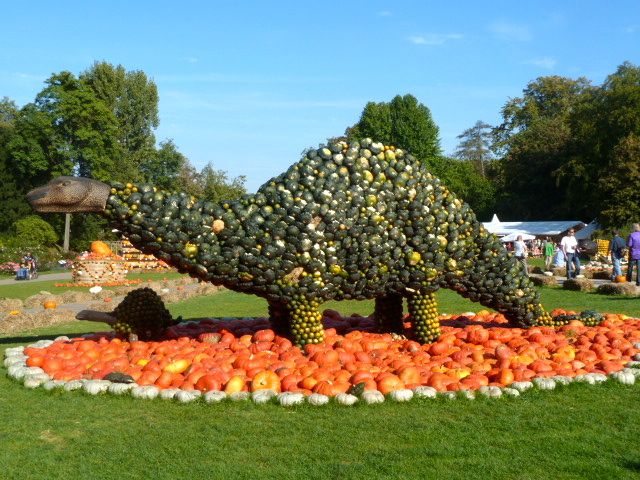 I’ve since changed my mind and have been several more times. It’s one of my favourite foodie experience ever.  I suspect I’m not the only Pumpkin Festival doubter out there, so here are:

Each year the Ludwigsburg Pumpkin Festival has a theme.  The first year I went it was Under the Sea featuring dolphins and blue whales made out entirely of pumpkins. Another year it was larger than life dinosaurs made of pumpkins: 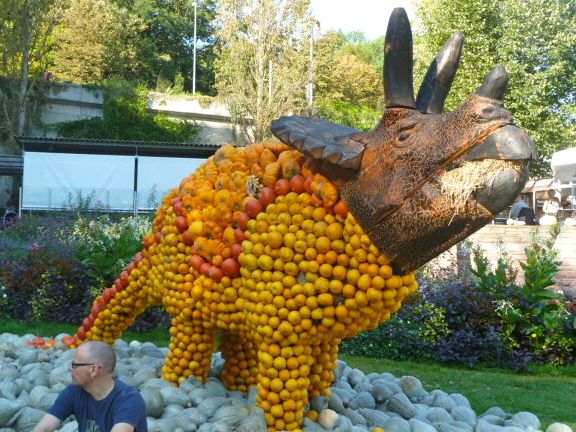 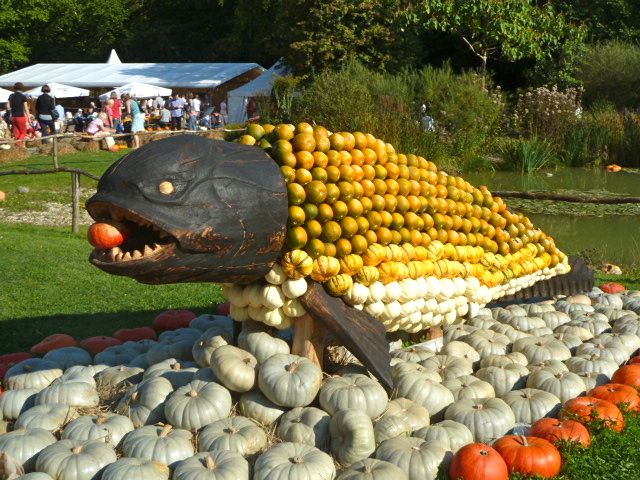 Kids loved seeing the dinosaurs, but so do kids at heart, at least I did.

In 2016 the theme was Pumpkin Circus, which was fun! It’s a great place to get some pumpkin carving inspiration, including some that are easy to do at home, aka, not life-size!

Not surprisingly the world’s largest pumpkin festival is an excellent place to buy a pumpkin. You’ll find different kinds from all over the world. Get your pumpkin carving toolkit ready!

I know that pumpkin and wine sound like a strange combination, but it’s actually really good. I love serving it to guests, as it always takes them by surprise. It sounds like a very odd, and not very tasty combination.

I bet when you first read pumpkin wine, you squished up your face and curled your lip.  It’s OK to admit it.  I know I did when I first saw it.

Although I was skeptical, I was also curious. I had to try it.

I took a small sip, ready to spit it out. To my surprise, not only did I not spit it out, I had another sip, then another.  In fact, I  liked it so much that I ordered another glass.

Now I’m hooked and stock up on pumpkin sparkling wine each year since it’s difficult to get out of season.

It’s surprisingly sweet, but not too sweet.  It isn’t too pumpkiny tasting, there’s just a hint of pumpkin.  It’s refreshing, yet balances the heavier flavours of a seasonal soup at the same time.

In keeping with the theme you can also eat an assorted variety of pumpkin goodies so go hungry.  My favourite is the pumpkin soup, which is consistently the best I’ve ever tasted.

I’ve also tried the Pumpkin Rösti (fried grated potato) which had an interesting flavour, although I wouldn’t have wanted to eat a whole plate of it.  The  Maultaschen (the German take on ravioli invented in nearby Maulbronn) looked amazing as well.

4) Seeing Pumpkins from All Over the World

What would the world’s largest pumpkin festival be without a judging competition?  The judging doesn’t happen until October but these two unique ones get my vote:

The festival is behind Ludwigsburg Palace, one of the largest Baroque buildings in Europe.  Just walking through the palace gardens and grounds is worthwhile in itself.

However, seeing the contrast of a palace and pumpkins is really something else.  It also is my favourite castle tour in all of Germany and I’ve visited a lot of castles in Germany. You can easily combine it with the festival.

If you do decide to do the castle tour and are doing some other sightseeing in and around Stuttgart, consider the StuttCard. It gives you free entrance to the castle.

The Ludwigsburg Pumpkin Festival is great for both kids, and kids at heart!

Know Before You Got to the Ludwigsburg Pumpkin Festival:

More information about the Pumpkin Festival can be found here. 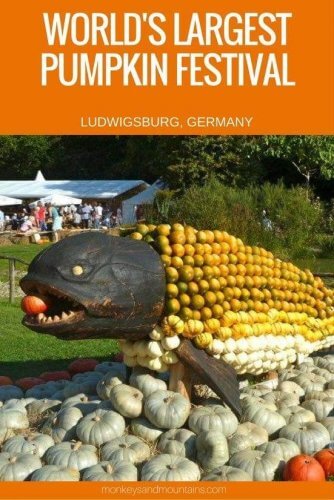 Note: This article was originally published in 2011 but was updated in September 2019 to provide the most up-to-date information.

Scroll back to top
9shares
We use cookies on our site to give users the best browsing experience. By clicking "OK" you agree to this. OK